The Upanishads of Yoga are poorly understood and there are few translations into Western languages. Swami Satyananda Saraswati introduces us to this teaching that leads the yogi to the recognition of their plenitude. 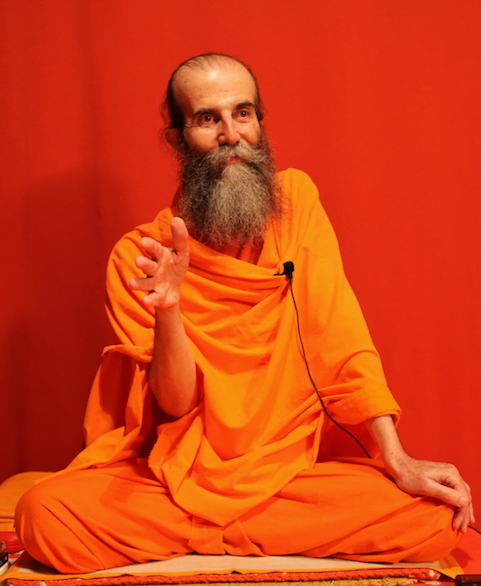 With his knowledge of the Hindu tradition, the philosophy of Yoga, Advaita Vedanta and Kashmir Shaivism, Swami Satyananda Saraswati regularly teaches in a pure, experienced and direct way, as traditionally transmitted, from guru to disciple. Today he responds to our questions:

What are the Upanishads?

The Upanishads are the very heart of Hinduism. They are the final part of the Vedas and they deal with the knowledge of our essence, atman. They expose the path that leads us to the plenitude of our Self.

Traditionally it is considered that there are 108 Upanishads of great relevance; Of these, ten are considered the most important, since they were commented on by Shankara, Ramanuja, Madhva and other great sages.

And specifically the Yoga Upanishads?

The Yoga Upanishads are a group of some twenty Upanishads which specifically expose the path of the yogi in his process towards liberation. They deal in depth with the different practices and stages along the way, and provide clarity in topics such as concentration, meditation, silence of the mind, states of inner absorption, contemplation in nonduality, samadhi, the process of purification, the subtle body, kundalini, mantra, inner sound or nothing, asana, pranayama and other aspects of the yoga path. These texts are considered authentic jewels and are a valuable guide for our practice.

Which Upanishad would be the most suitable to introduce us to this teaching?

Traditionally it begins with the study of the ‘Katha Upanishad‘, a text that narrates the dialogue between the young Nachiketa and the great master Yama. We find in it the following verses of great beauty:

“The supreme Self, which is hidden in all beings, does not shine outward; but it can be seen by the wise by means of their concentrated and subtle intellects. “

“Get up! Awake! Get close to the greats (wise) and learn from them! The path is as narrow as a razor’s edge, so the wise say. ”

It is important to remember that traditionally one does not study these texts on his own, since the searcher can acquire incorrect or incomplete understandings. In Hinduism, great importance is given to listening to the teachings of a master, shravana. During this listening, there is a transmission of wisdom and the blessing of the master. Then, when the aspirant continues to study the text after hearing it, the text for him comes to life.

How does this narrative unfold?

The teaching of the Upanishads is usually expressed as a dialogue between a master and a disciple. The structure of the texts greatly varies and are very free in their expression; at the same time it is very simple, yet metaphysically very profound. Knowing to some extent the foundations of Hinduism helps to understand the depth of their teaching. Certain Upanishads present their wisdom through stories, dialogues between wise ascetics and kings; narrations of the creation of the cosmos, among others. There is ample freedom in their form of expression.

In the ‘Chandogya Upanishad‘ there is a well-known story: Shvetaketu had returned home after twelve years of study with a master. His father Uddhalaka, a wise man, perceived in his son a certain conceit and a lack of humility, due to the knowledge acquired and not properly assimilated. To prove it, Uddhalaka asked him: “Do you know that once That is known, there is nothing left to know?” Shvetaketu, surprised, did not know what to answer. He told his father that his teachers surely did not know it. After a few days, with a humble attitude, Shvetaketu asked Uddhalaka to teach him about this.

Uddhalaka taught him in a simple and profound way. He asked him to bring a glass of water. Then he asked him to pour salt into the water and move it until it dissolved. After a while he asked: “Can you see the salt in the water?” Shvetaketu replied: “No, I cannot see it, it has dissolved.” His father and guru Uddhalaka told him: “In the same way that salt is present in this water, even if it is not seen, so the atman is present in everything that exists.”

According to the teaching of the Upanishads, how can we carry out the daily practice of meditation without it becoming a mechanical act?

Meditation is the centre to which all spiritual practices lead. Hatha yoga, kirtan, concentration and study, among many other practices, are supports for the energy of the senses and the mind to go inward.

The yogi realizes that moments of meditation are very sacred moments. For practice, he prepares his body so it feels clean and pure, as well as his clothes. He sits in his asana or meditation cushion, with an attitude of dedication and humility to remain in himself. In this process, it can sometimes help us to listen to some mantras, look at the image of our teacher or something that inspires us, read a sacred text or do pranayamas. “I am grateful to the cosmos that gives me the opportunity to have this moment with myself, I honour my own sacred existence and, having generated an open and sacred attitude, I direct my senses and my mind inwards.”

In meditation we try to enter the space where we simply “are”. The space in which we do not want to achieve anything, but we are simply sitting lovingly and calmly in total presence, observing the silence before thought. The help of the practices mentioned above will make our meditation easier and deeper, and we can access the space of non-thought. When this happens, the great silence manifests itself and the yogi recognises the plenitude in his heart. This is the fruit of constant practice carried out for a long time with respect and love. In yogic language, this perseverance is called abhyasa. This whole process is meticulously detailed in the Yoga Upanishads.

The purification of the yogi leads to the awakening of his kundalini energy and from this, the recognition of his essence. Could you explain about the process of meditation, kundalini and realization?

When the practitioner can hold a deep meditation and have the grace of his teacher, the awakening of the kundalini energy takes place naturally. This awakening involves a deep inner transformation, since the nature of kundalini shakti is to purify us and bring us to the maximum expression of plenitude.

Kundalini leads us to the transcendence of limitation and to the full recognition of who we are. The Yoga Upanishads specifically deal with this purification and transformation.

To finish, could you share a quote from the Yoga Upanishads?

One of the Yoga Upanishads, the ‘Amritabindu Upanishad‘, says:

“The mind is the only cause of slavery and the liberation of human beings. The mind attached to sense objects leads to slavery. The mind that is free from attachment to objects sets us free.

The supreme state is when the mind remains firmly in the heart, having given up all attachments to sense objects. There, the mind reaches its true nature, the Self.

“Control the mind until it is founded in the heart, this is wisdom, this is meditation; the rest is nonsense ”.

Swami Satyananda Saraswati will teach the Yoga Upanishads in a retreat that will deepen the practice of meditation and will explain the process of awakening kundalini as explained in the Upanishads.

When and where: from 4 to 12 August in Girona. During these days, you will enjoy the ashram life in a natural environment, with meditation practice, hatha yoga, kirtan, silence and service.

It is worth remembering that many of these texts are not translated into Spanish. It will be a very special opportunity to discover this ancient wisdom that is not easy to access.

This website uses cookies to improve your experience while you navigate through the website. Out of these cookies, the cookies that are categorized as necessary are stored on your browser as they are essential for the working of basic functionalities of the website. We also use third-party cookies that help us analyze and understand how you use this website. These cookies will be stored in your browser only with your consent. You also have the option to opt-out of these cookies. But opting out of some of these cookies may have an effect on your browsing experience.
Necessary Always Enabled
Necessary cookies are absolutely essential for the website to function properly. This category only includes cookies that ensures basic functionalities and security features of the website. These cookies do not store any personal information.
Non-necessary
Any cookies that may not be particularly necessary for the website to function and is used specifically to collect user personal data via analytics, ads, other embedded contents are termed as non-necessary cookies. It is mandatory to procure user consent prior to running these cookies on your website.
SAVE & ACCEPT
Go to Top